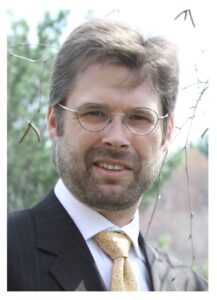 Mr. Lindee was born and raised near Cleveland, Ohio, where he attended a private day-school operated by the Lutheran congregation of which his family were active members; and later, he moved with his family to rural northwestern Wisconsin where he completed his secondary education in the public school system. He graduated from the University of Wisconsin – River Falls (UWRF) in 1994, with a Bachelor of Science in Mathematics (ΚΜΕ) and Physics (ΣΡΣ), carrying minors in Computer Science and Economics, and continued his studies there as a graduate student in a Master of Arts program focusing on Education in Math and Science at the “Transescent” and Secondary levels. In 2005, Mr. Lindee commenced graduate studies at Northwestern College in St. Paul, MN, and graduated in 2007 with a Master’s degree in Organizational Leadership. In 2010, he was received as a Fellow (FCA) by the International Academy of Apologetics, Evangelism and Human Rights in Strasbourg, France.

Occupationally, Mr. Lindee is a consultant in the IT discipline of Enterprise Systems Management (ESM), which encompasses the specialties of centralized systems, application and network monitoring, technical-business reporting, automation and event management (and its integration with IT service management), and has provided his services primarily to large and very large (international) corporate enterprises and government agencies all over the United States.

Mr. Lindee and his wife of 21 years are the parents of seven children, ranging from ages nineteen to six years old. They espoused the principles of Classical Education early in their marriage, and have, over the years, continued to actively study its theory and praxis, have embraced the challenge of putting it into practice, and have, as a result, steadily grown in their understanding and appreciation of this historic, yet very relevant and invaluable, form of education. Discovering the Consortium for Classical Lutheran Education (CCLE) in 2007, they have since been regular attendees of its annual conferences, and heartily recommend this organization to Christians seeking an escape from contemporary post-modern pedagogics and desiring a return to the form of education commissioned by Dr. Martin Luther and systematized by Melanchthon, Sturm and others, as that which would prepare a society of Christian laymen to both hold on to pure doctrine and remain free and profitable citizens for the benefit of the Church, of the State and of their neighbors. As Home Educators, Mr. and Mrs. Lindee endeavor to provide their children with a rigorous education in the high standards of the Classical Lutheran tradition, and to this end have received tremendous benefit from the course offerings provided by Wittenberg Academy. Today, the Lindee Family lives in rural northwestern WI. They are founding members of Apologia Evangelical Lutheran Mission. In all of his “spare time,” Mr. Lindee enjoys various diversions as an active outdoorsman, an aviator, a book collector, a patron of the Fine Arts (Classical Music and Art, in particular), and as a shade-tree mechanic.

Back to Staff and Leadership